We are all saddened by the Ignoble massacre in Paris on the night of 13th November perpetrated by the ignorant souls in the name of God  , Indeed I witnessed one of the scenes near Place de la Republique while driving on my way to my residence with two of my Gopio friends after a weekly meeting in our office of Passage Brady in Paris 10., We witnessed a war like situation with Police in civil with pistols and rifles standing on both sides of the road and shouting and running, We found our way out of that place which is not the sujet of my writing here .

Security is beefed up all over the city, State of Emergency is declared by the President and extraordinary measures were taken for the security of the locals ,  Yet I can see anger and incomprehension with the people , common man is anguished , Méfiance is on the air..

There are people who lost their dear ones , People who came out for fun found themselves enveloped in tragedy …..

How to console them , how to overcome  the situation of after 13/11… Paris will never be the same Paris that we use to live, love and cherish.,

You will not have my hatred”, He writes to the terrorists who killed his wife in the attacks on Paris last week.

Antoine Leiris’ wife was killed in the massacre at the Bataclan theatre in Paris on Friday night, where 88 other people were also killed while attending a concert.

“Friday night you stole the life of a being of exception, the love of my life, the mother of my son, but you won’t have my hatred,” says Leiris, in a post on Facebook.

In the incredibly touching and brave post, he writes about his wife: “I saw her this morning. Finally, after nights and days of waiting. She was just as beautiful as she was when she left on Friday evening, as beautiful as when I fell madly in love with her more than 12 years ago.”

Leiris and his wife have a 17-month-old son.

“We are two, my son and I, but we are stronger than all the armies of the world,” Leiris said. “If this God for which you kill indiscriminately made us in his own image, every bullet in the body of my wife will have been a wound in his heart.”

He says he refuses to give the killers a feeling of victory by hating them.

“No I won’t make you this gift of hating you …Of course I’m devastated with grief, I admit this small victory, but it will be short-lived. I know she will accompany us every day and that we will find ourselves in this paradise of souls free to which you’ll never have access.”

Leiris adds that he refuses to be afraid, either. “You have it coming, but to respond to hatred with anger would be giving in to the same ignorance that made you what you are. You want me to be afraid, to look at my fellow citizens suspiciously, to sacrifice my freedom for security. You lose. The Player still Plays.”

As for the little boy who will never again see his mother: “..we will play like every other day and all his life this little boy will dare to be happy and free. Because No, You won’t have his hatred either.”

Yes he is right, The hatred will bring in more hatred among us , As Gandhi Ji said “AN EYE FOR AN EYE WILL MAKE THE WHOLE WORLD BLIND”

Yes the life should go on , We should live our life in full, And let us show them what is love and what is caring, They may succeed in taking the life but they may not succeed in changing our attitude and love for the present lifeJ  Yes it is our duty to bring harmony and peace among the communities we live with.

Dear Friends,   As you know we will be gathering together on the occasion of rekindling of the flame of the unknown soldier under the Arc de triomphe

Programmed for 16th of December , Event will be followed by a get together of all Gopio members present on the evening , We may change this event as a mini conference of GOPIO , A program and the schedule of the event should be finalized in the following days ,

We welcome suggestions for the panel discussions and conclusion of the event .

One of the topics may be : How to bring Interfaith dialogue and tolerance among the communities

I am at your disposal for any further suggestions on this regard. 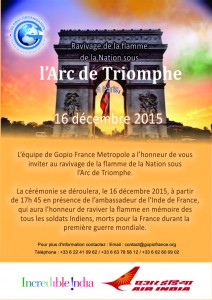 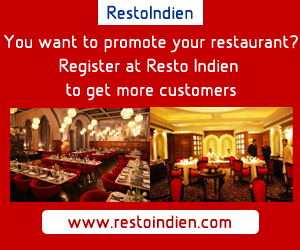